For the 2016 NSW Atura Drag Racing Championships season, we decided to brighten the appearance of The Short Bus. 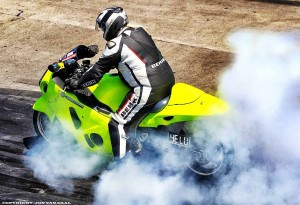 The brightest possible yellow was chosen as a nod to a Nostalgia Street Bike that Mick built in 1997.

The original plan was to wrap the bodywork but time and funds were both lacking so Mick decided to try out Plasti Dip and their Blaze Yellow.

The lesson learned about spraying yellow is that the white base coat needs to be complete. Any dark patches will show through.

Another lesson learned is that graphics and decals do not adhere very well to the textured finish of the Plasti Dip. The Silkolene stickers were held on by luck rather than adhesive! Everything else went on the screen. 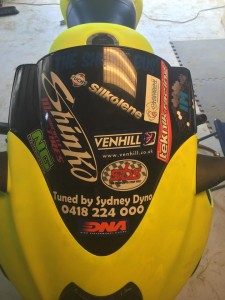 The new parts fitted before we went to Sydney Dyno worked fine. The problems came from parts fitted after that!

A couple of days before the meeting, Mick removed the clutch pack to measure and adjust the stack height. Normal maintenance that happens before every outing. But not this time. The 100,000km-old clutch slave cylinder decided that its life was over and failed. No warning. It was working one day and not the next. Leonard from Azzopardi Racing saved the day by removing one from his own bike and lending it to Mick. Thank you very much for that. A brand-new one was ordered from Western Motorcycles but didn’t arrive before the meeting. It has now and will be fitted before round two.

When the air shifter was fitted, it was pieced together to use the best possible parts available. Central to this was the Rocky Creek Design air compressor and the Boost By Smith plug & play wiring harness. To allow the air resorvoir to be topped up to 120psi, Mick fitted an air pressure switch that turns the compressor on when pressure drops below 90psi, and turns it off at 120psi. In case it needed topping up, Mick pinched an idea from Ken Collin and wired the pass switch up as an override for the pressure switch so that he could squeeze the pass switch and turn the compressor on. Then the 15-year-old switch decided to fail and pop the main fuse! Back to relying on the pressure switch for the first meeting.

Everything was tested and ready. Except the air shifter. It worked on the hoist in the workshop but hadn’t been tried under load. With confidence overflowing, Mick proceeded to push the horn button to make it change gears after leaving the line on his first qualifying pass while listening to the engine bounce off the upper rev limiter. He wrongly figured that it was due to the travel of the air shifter cylinder and moved levers and stuff before the second qualifier, which was almost as bad as the first.

Smarts finally returned when he realised that the programmed ignition kill was stuck in an ad break so he removed the cylinder and decided to shift manually. That would have been fine except that the new gear lever sits closer to the footpeg than is comfortable for a size 12 boot. Of course it was in neutral when he let go of the clutch lever with the throttle wide open and the engine revving hungrily against the two-step rev limiter. Another journey to the upper rev limiter was followed by a boot to the lever stomping it into first before heading down track behind Geoff Viegel who took a well-deserved win. 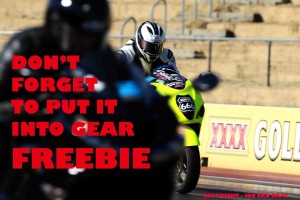 The bloke who attempted to crimp these wires no longer works for Boost By Smith. They are the reason why the engine did not die momentarily when Mick was pushing the button. Greg Smith is a true gentleman and offered a free replacement but we can fix it here before next meeting. 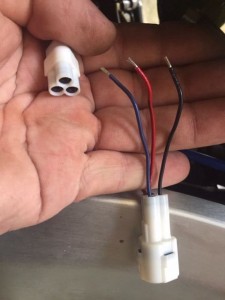 We’re replacing the left-hand switchblock with a good one that came from Derek Rebeiro. Also being replaced is the Gear Position Sensor that was giving strange readings. A brand-new one from Western Motorcycles will fix that problem. 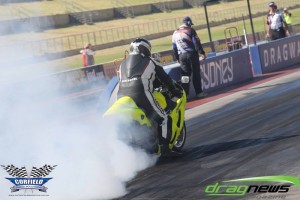 Here’s The Short Bus sitting in the workshop waiting for the next round of the 2016 NSW Atura Drag Racing Championships. We’re planning a much better day at the races. 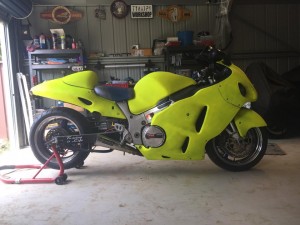